San Francisco Transit Spending Up Without Any Service Improvements

San Francisco Transit Spending Up Without Any Service Improvements

New research by California Common Sense found that over the last 10 years, San Francisco city government spending on public transportation has increased by nearly 50 percent, yet the number of scheduled service hours has remained fairly constant while on-time performance has decreased slightly. This is no surprise to regular Muni riders. San Francisco is paying more for a transit system that is not improving its delivery of services. The graph of Muni ratings confirms this, showing that despite large increases in spending, the residents of San Francisco are not any more pleased with public transport. To be fair, the final graph does show that the percentage of public transport vehicles that run on time has increased by roughly a fourth. (Although brand new data just released shows that Muni on-time performance is slipping). The data does not reflect that up to $60 million per year of funding that is part of the Muni budget is actually sent to other departments through the process known as Work Orders – a practice the Reset San Francisco community is working to reform. 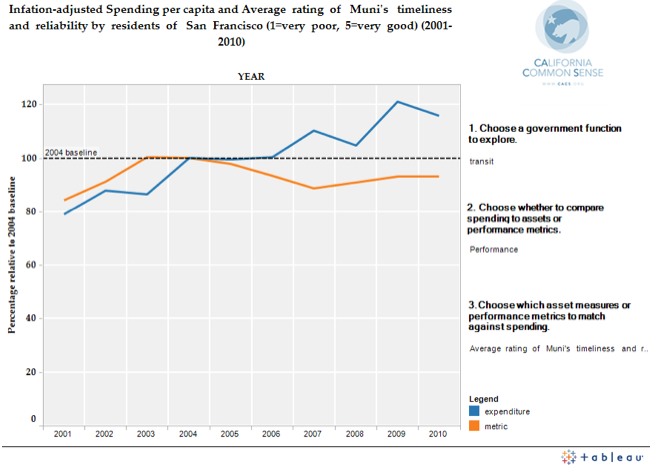 So, increased spending may be having positive impact in some places, but the data does not show clear results. What do you think about these facts and San Francisco city public transit?