A new photo at 20th and Valencia is helping to keep Robin Williams' memory alive in San Francisco.

Welcome to the fourth installment of Community Camera.

#CommunityCamera is Reset San Francisco‘s weekly series that features a photograph capturing the spirit of community within San Francisco or the broader Bay Area.

Our previous editions have highlighted photos taken by Hip Hop Lyft — a creative Lyft driver who uses hip hop trivia as a way to connect with his passengers — and the National Psoriasis Foundation – Northern California Division (a.k.a. NPF NorCal) — a non-profit organization that seeks to improve the quality of life for those suffering from psoriasis and psoriatic arthritis while increasing research to find a cure.

In these previous posts, we highlighted community in the sense of people coming together to share an interest or learn something new (in the case of Hip Hop Lyft) or joining up to fight for a cause (in the case of NPF NorCal).

This week, our approach has shifted to the sense of community that can form around a shared loss and the desire to preserve a legacy (much as we saw earlier this week following the death of community activist Rose Pak).

The photo we’ve chosen to feature for this week’s Community Capture post is a newly unveiled portrait of Robin Williams in San Francisco’s Mission District. As reported by Hoodline, the photo of Williams is located near the soon-to-open Smitten Ice Cream shop at 20th and Valencia streets.

The picture was taken in 1983 by Michael Jang, a graduate of the San Francisco Art Institute, who has earned a living as a portrait photographer for the past 40 years.

As Stephen McLaren wrote in the British Journal of Photography:

“If you had to invent a photographer who captured the essence of California in the 1970s and 80’s – its exuberance and dubious fashion sense, its rebellious subcultures and obsessions with celebrity – you would have to invent Michael Jang.

“His work is idiosyncratic and yet somehow imbued with his infectious personality, fresh and suited to these eclectic times, and he’s gone from being a largely forgotten portrait photographer, who stored his archive in boxes in his garage, to a respected figure on the Californian photography scene.”

Jang, who has shared several pictures of the photo installation via Instagram, called it his “tribute to #robinwilliams in San Francisco.”

Williams, who committed suicide at his home in Marin County in August 2014, had deep ties to the Bay Area.

In the mid-1970s, he started his career as a comedian by playing standup at various comedy clubs in San Francisco. Later his career expanded to acting, and one of his most famous and beloved films — Mrs. Doubtfire — was set and largely filmed in SF.

Upon learning the news of his passing, mourners thronged to the Pacific Heights home that was featured in the film, and Williams’ ashes were later scattered in the San Francisco Bay.

As the old adage goes, “A picture is worth a thousand words.”

Based on the initial feedback to Jang’s portrait, this will be a very worthy (and hopefully long-lasting) tribute to Robin Williams. 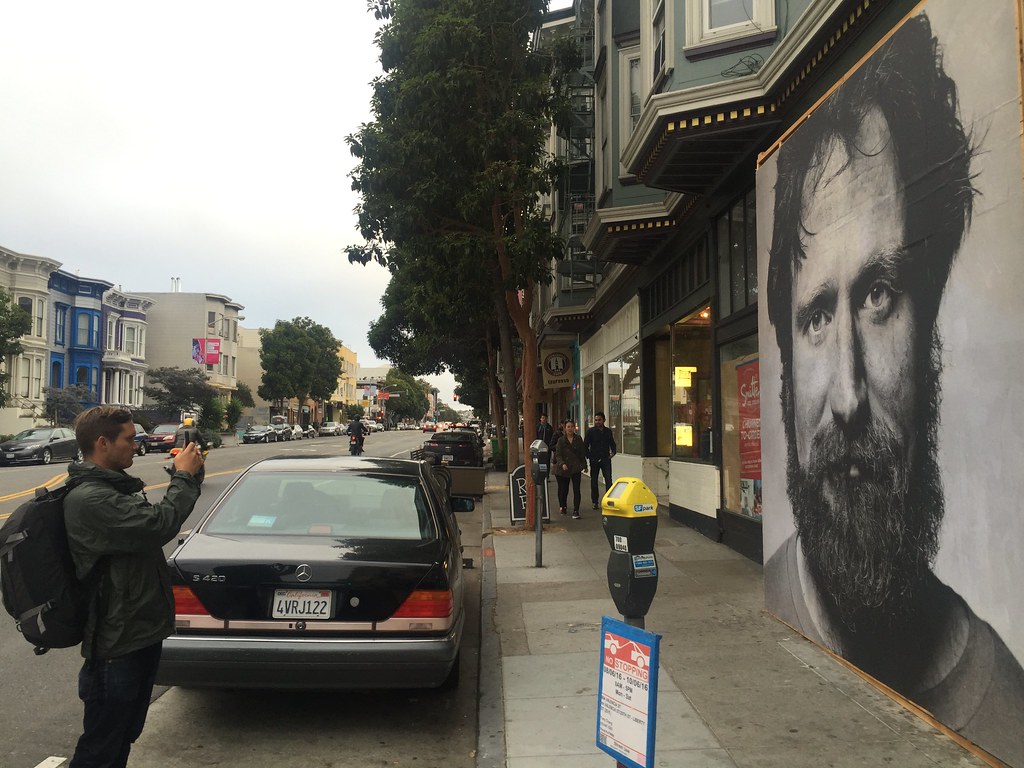